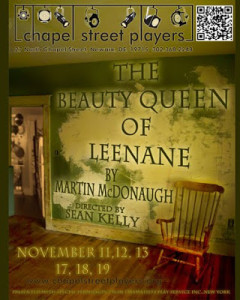 Beauty Queen of Leenane is a neat and tight play by Martin McDonaugh, a child of Irish parents born in London where his family had emigrated just as the families of his Leenane must do in the 1989 setting. The characters he presents are also quite finely drawn. 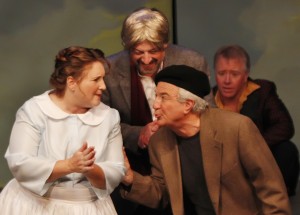 Posted by Marshall Garrett
Going to a live performance of Shakespeare is always a delightful event. Having a work by the greatest author in the history of our language delivered in the manner in which it was intended is, sadly, a rarer and rarer treat, 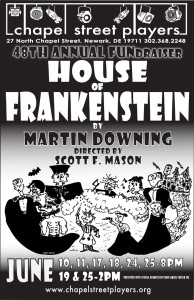 Feeling silly? In the mood to shed a layer of skin and let out your inner monster? Then Chapel Street Players’ production of House of Frankenstein by Martin Downing (directed by Scott F. Mason) would be your best bet for entertainment this weekend! Vampires, werewolves, 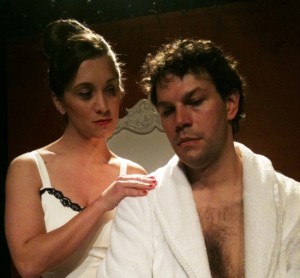 When Brick, Maggie the Cat, Big Daddy and Big Mama come to town, it’s always a cause for celebration. Theatregoers know they’re in for an evening of epic family squabbling and steamy sexuality delivered in Tennessee Williams’ singular combination of Southern-inflected poetry and vulgarity. It’s therefore fortunate that the Chapel Street Players are giving us a look at Williams’ 1955 Pulitzer Prize-winning play Cat on a Hot Tin Roof—it may or may not be Williams’ best work, 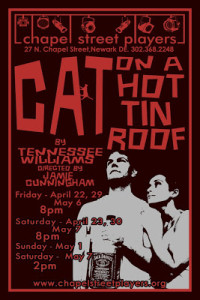 Pulling off a Tennessee Williams play about southern social mores in the 1950s wasn’t easy in the 1950s, but doing it in 2011, on the 56th anniversary of the play’s first production, is quite a feat.

Jamie Cunningham is most ambitious in trying to portray a culture not his own with its intricate balance of family power,

The Chapel Street Players in Newark, Delaware took on the challenge of presenting the area premiere of David Lindsay–Abaire’s 2007 Pulitzer Prize winning play RABBIT HOLE. The show, which received a film adaptation in 2010, follows a married couple and their family as they grapple with the tragic loss of their four-year-old son.

What incredible risks Anthony Bosco took for the new Chapel Street Players production of Rabbit Hole by David Lindsay-Abaire! First of all, the cast were almost all new to CSP. Secondly, he was taking on a play which the playwright himself had just adapted for a movie with Nicole Kidman. 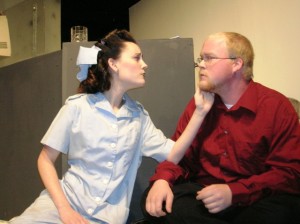 COMIC POTENTIAL, the title of the current offering from Chapel Street Players in Newark, DE, pretty well sums it up. The full-length comedy written by British playwright Sir Alan Ayckbourn is a curiously interesting play with a seemingly absurd plot. Set in a future time when androids are common, 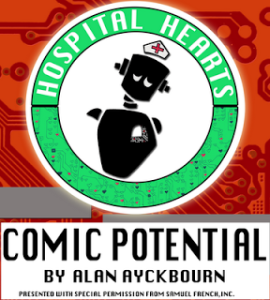 From the moment the lights go up, you can’t help but notice Jacie (Courtney Wallace) give a broad but quiet smirk as she plays the nurse on a hackneyed production with the unctuous doctor, the sobbing mother and the son who is being told he will have to lose his foot.

Before I even begin to discuss AMADEUS, by Peter Shaffer, this is what you ought to do for yourself ASAP… call 302.368.2248 at Chapel Street Players in Newark, DE and make reservations to see this play about which I can only gush endlessly. Only two more weekends left to see it!