The Pillowman, is a 2003 play in three acts by Irish playwright Martin McDonagh. This black comedy tells the story of Katurian (Jimmy Van Buren), an amoral writer of fiction, who lives in an unnamed totalitarian state and who is interrogated regarding the gruesome content of his short stories because they closely resemble recent child murders in his town. Audiences may be jolted by events described and depicted onstage in this pitch-black comedy and those with delicate sensibilities should avoid seeing The Pillowman. (Advisory: This play contains strong language and depicts/describes murder, mutilation, dismemberment, child abuse, and other violence.) 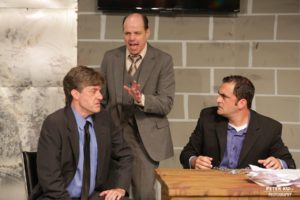 While Pillowman is touted as a comedy, the laughs are sparse due to the gruesome theme of the play, but they are well-placed and usually followed by something shocking that will cause the audience to gasp or cringe in their seats—apropos for a play about a man suspected of torturing and murdering children. The ghoulish tales that Katurian spins (think Grimm Brothers reimagined by Wes Craven) are products of his f****d up childhood and far from funny, especially to Tupolski (Steve Conner) and Ariel (John Barker), the overzealous, over-the-top cops who are alternately interrogating/torturing Katurian. It gets real when Katurian learns that the police have his mentally ill brother, Michael (Sean McKean), in custody as well. To delve any deeper into the plot of this play would risk revealing spoilers that would rob the audience of their theatre going experience.

To read a synopsis of the play, you might think Pillowman is about a hideous crime and harsh (if not deserved) punishment, but Pillowman is all about the art of storytelling set against a macabre theme of violence. Every character in the play tells a story—from Katurian’s fractured fairy tales to the deceptions of the police, but how do you know something is true simply because someone told you? 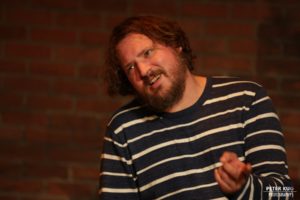 Director J. W. Pukatsch has been passionate about bringing this play to the stage for some 10 years. His patience has finally been rewarded, and although a bit of a departure for Chapel Street Players, audiences with strong constitutions will be rewarded as well with a solid, well-acted, well staged production. Jimmy Van Buren is fantastic as Katurian and manages to make an unlikeable character sympathetic as humanly possible. John Barker and Steve Connor (Ariel and Tupolski) are brilliant as the over-the-top, torture happy good cop/bad cop duo. Finally, Sean McKean shines as Michael and manages to aptly portray both the childlike innocence and shocking ugliness of Michael. Special mention to Penelope Rose Teague who was adorable as the little girl. 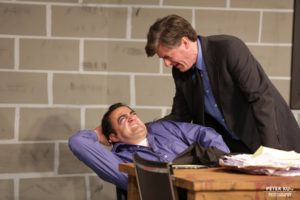 Pukatsch wore multiple hats for this production as he was also the lighting and set designer. As is always the case, the set was well designed, practical, and functional. It easily morphed from grim interrogation room to childhood home to help tell Katurian’s backstory.

The Pillowman runs through August 5th on the CSP stage.