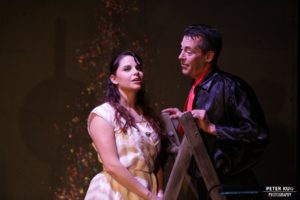 The enchanting musical that first premiered at the Sullivan Street Theatre, an intimate, off-Broadway venue in New York City’s Greenwich Village on May 3, 1960, and went on to set a record as the world’s longest running musical with 17,162 performances before closing in 2002, returned to the equally intimate Chapel Street Players’ stage on June 9th. First seen on the CSP stage in 2001, the latest production of Tom Jones and Harvey Schmidt’s commedia dell’arte-style fable, adapted from Edmond Rostand’s “Les Romanesques,” is back for a new, limited run. 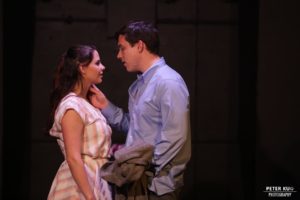 The magic begins with the first melodic notes of the overture as a traveling troupe of actors take to the stage and the charming narrator and rogue-for- hire, El Gallo, implores the audience to remember when love was tender and new (“Try to Remember”). The charming bandit then invites the audience to experience a world of magic and moonlight, explaining the plot of the play. The Fantasticks is a modern twist on Romeo and Juliet—a romantic comedy about a boy, a girl, two feuding fathers, and a wall. Matt and Luisa fall in love, despite the wall their fathers have built to keep them apart. The young lovers believe their parents are against their budding romance, but the scheming gentlemen have secretly orchestrated the whole affair, even going so far as to hire professional bandit, El Gallo, and a band of actors to “abduct” Luisa so that Matt may heroically defeat the brigands and secure the union. The ruse works. Matt and Luisa fall in love, but grow apart and separate when El Gallo exchanges the moon for the sun and they discover that what seems magical by moonlight loses its charm under the glaring light of day. Matt and Luisa finally find their way back to one another after experiencing the harsh realities of the world. They realize all they ever wanted was each other, emphasizing the truth in El Gallo’s words that “without a hurt, the heart is hollow.”

Bob Miller is charming as the narrator/rogue-for- hire, El Gallo, and captivates the audience, with his rich, unamplified voice, inviting the audience to use their imagination and enter a world of moonlit magic. Samuel White and Donna Marie Pizzo are adorable as the star-crossed lovers, Matt and Luisa. White and Pizzo exhibit wonderful chemistry, pleasant vocals, and great energy. Jim Conte (Hucklebee) and Patrick Ruegsegger (Bellomy) are delightful as the garden-happy dads, garnering big laughs and entertaining with their vaudeville-like song and dance numbers. Dennis E. Williams as Henry, the ancient (and dusty) actor, and Sam Dressler as Mortimer, the death-scene specialist Indian (he’s not really an Indian), hysterically stole the scenes in which they appeared.

Ray Barto faithfully replicates, as much as possible, the staging of the original production and Bill Fellner gives equal treatment to the classic score. There are no over-the- top, glitzy numbers here, no fancy-schmancy sets, and certainly no re-imagined adaptation of this beloved classic, just a piano, a handful of actors, some basic props and costumes, and a lot of imagination. The result is the same heart-warming experience that has delighted theatre goers for 57-years.

The Fantasticks runs through June 24. Call the box office at (302) 368-2248 or visit www.chapelstreetplayers.org to reserve your tickets today.