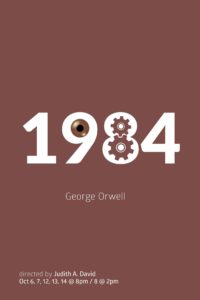 George Orwell’s dystopian classic “1984” comes to the Chapel Street Players this October. The adaptation by Owens, Hall and Miles depicts the horror of man’s fate in a society where Big Brother is always watching – where everything that is not prohibited is compulsory. Orwell himself said: “I do not believe that the kind of society I describe necessarily will arrive, but I believe something resembling it could arrive. The moral… is a simple one: Don’t let it happen. It depends on you.”