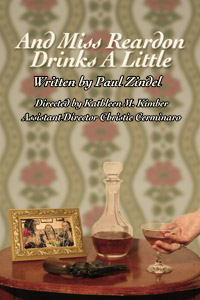 A brilliant Broadway success, this biting, touching and often wildly funny play probes deeply into the tortured relationship of three sisters whose lives have reached a point of crisis. Their father having deserted them in their childhood, the three Reardon sisters have grown up in a house of women, dominated by their mother, who is only recently dead. But time has erased the tender closeness of girlhood; one sister has married and cut herself off; another has begun to drink more than she should; and the third, after a scandalous incident at the school where she teaches, is on the brink of madness. When the married sister comes to dinner to press the need for committing her sibling to an institution, the simmering resentments of many years burst alive and are exacerbated by the intrusion of a well-meaning but boorish neighbor couple, whose unexpected arrival impels the action towards its shattering conclusion—in which all the pathos, humor and searing honesty of the play combine with overwhelming effect.

*Please be advised that this production contains gunshots & adult content