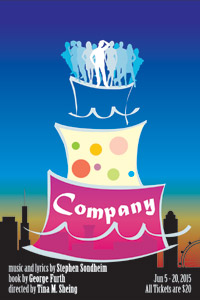 Since CSP Players is celebrating it’s 80th birthday, We thought we could share Bobby’s birthday with us for our FUNdraiser!!!

On the night of his 35th birthday, confirmed bachelor Robert contemplates his unmarried state. Over the course of a series of dinners, drinks, and even a wedding, his friends — “those good and crazy people [his] married friends” — explain the pro’s and con’s of taking on a spouse. The habitually single Robert is forced to question his adamant retention of bachelorhood during a hilarious, yet accurate, array of interactions.

COMPANY features a brilliantly brisk and energetic score containing many of Stephen Sondheim’s best known songs;
Being Alive, Another Hundred People, Ladies Who Lunch, to name a few. The strength of the piece lies in its vivid yet real characters,meaning impressive technical aspects aren’t necessary to convey the story. It can be told as effectively with a cavalcade of automated set pieces as it can with a chair or two. Every audience member will see reflections of themselves in at least one of the characters on stage; keeping them both engaged and entertained from the rise of the curtain rise to its fall.