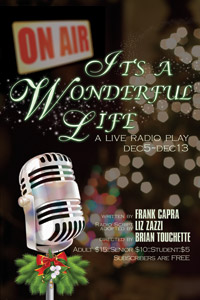 Christmas Eve, 1946… George Bailey, the nicest guy in town is in a terrible predicament. We find him perched precariously on a bridge, on the verge of suicide. Enter Clarence, George’s guardian angel, who has not yet earned his wings. Clarence shows George what Bedford Falls would be if George had never been born.
This beloved holiday-season drama is brought vividly to life in a stage adaptation of Frank Capra’s classic film of sacrifice and redemption in small-town America. It is staged as a 1940s live radio broadcast in front of a live studio audience — YOU! The show is good for all ages. It is also an opportunity for grandparents to bring the grandkids and show them what it was like before TV and videogames when a few actors played lots of characters, the sound FX were live by a sound artist, and a piano player was the soundtrack.