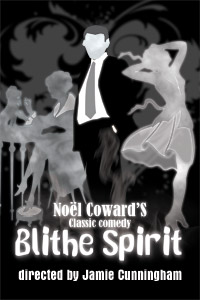 This classic Noël Coward comedy concerns a socialite who invites an eccentric clairvoyant to conduct a seance, hoping to gather material for his next book. The scheme backfires when he is haunted by the ghost of his annoying and temperamental first wife after the seance. The attempts to rid the house of this (and other) nuisances result in chaotic whimsy, surprises, and laughs. This show about spirits is sure to put you in the best of them- spirits that is!