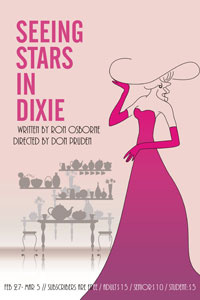 Elizabeth Taylor and Montgomery Clift are in Natchez, Mississippi to film “Raintree County” for MGM in 1957. This is to be a true Southern Epic to rival “Gone with the Wind”. There happens to be a small part for a local woman and the competition develops between two very dissimilar local ladies.
Clemmie, the owner of the local Tea Room vies for the role, with the help of her friends Tootie and Joe Beth with special support from Glease, who is a constant customer at the Tea Room. Clemmie’s life changing journey toward possible movie stardom, leads everyone down paths of laughs, dreams and hopes. Clemmie’s Tea Room becomes the launching pad for typically charming characters that don’t just live in the South.