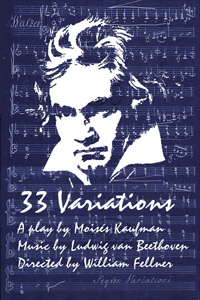 ” 33 Variations was one of the most powerful, inspiring, intellectually stimulating and moving plays I remember having seen in recent years.” — James F Weiher
” 33 Variations was very entertained and moved. Phenomenal job!” — Brooks Black

Drama, imagery, and music combine to tell a story of compassion, love, and obsession across two centuries and two continents. It received five Tony nominations for 2009 (one win), including Best Play.

In 1819, Anton Diabelli, a Viennese music publisher, invited 50 composers to submit one variation each on a waltz of his own composition. Only Ludwig van Beethoven, then at the height of his musical power, declined. He regarded Diabelli’s waltz as a trivial patchwork. But then, strangely, Beethoven began writing variation after variation, ultimately 33 in all. Some 200 years later, the musicologist Katherine Brandt is determined to understand why. In the course of these parallel journeys, a mother will be reconciled with her daughter, a composer with his genius.

Additional information about the play, its author, and the historical context.