“The Lion in Winter: What Family Doesn’t Have its Ups and Downs?“ 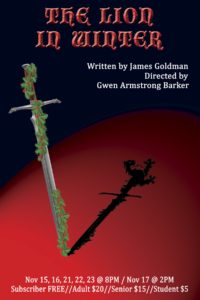 It is  the year of our Lord 1183 and Henry Plantagenet, King of England, fears for his country.  At 50, he is an old man by the standards of the day.  Given the recent loss of his oldest son and heir apparent, he fears his remaining three sons will tear the country apart vying for the throne after his death.  As he makes plans to settle the crown on his youngest son John, Eleanor, Henry’s dangerous and brilliant wife, schemes from the prison he has locked her in to gain the crown for her favorite, Richard.   Their middle son, Geoffrey, has some ideas of his own about whom should rule.  It is Christmastide, and the great king has summoned his family to his side to settle things once and for all…..

James Goldman’s award-winning classic is filled with humor, the looming threat of violence and the dark complexities of family life.  As you ready yourself for the holiday season, come see whether the Plantagenets will “hang the holly, or each other”.