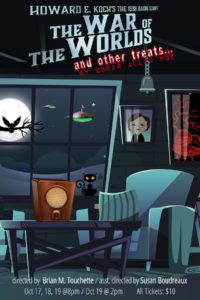 The War of the Worlds was broadcast from New York’s Mercury Theatre in 1938. This infamous radio play had many terrified listeners convinced that an actual alien invasion of Earth was taking place. If you survive the alien attack, you will then be treated to a selection of Edgar Allen Poe’s stories, read in all their terrifying details. We will also explore the legend of Poe and his rumored travels to Newark, Delaware. All of this is staged as a 1930s live radio broadcast in front of a live studio audience — YOU! It is an opportunity to see what it was like before TV and videogames when a few actors played numerous characters and the sound effects were performed live by a sound artist.

My first CSP show opened in September 1993. Less than seven months later, I had my directorial debut in this theatre. My experiences at CSP helped me to grown in many ways over the past 25 years, but the way in which I think I’ve grown the most is as a director. I’ve learned how to be a better director from so many individuals: working with other directors, ass’t directors, backstage crew, actors and even audience members here at CSP and other local community theatres. All have helped me to learn, improve and become a more confident director.

I first read the script for One Flew Over the Cuckoo‘s Nest over four years ago. I was less than 20 pages in and I knew I had to direct this. The writing is exquisite, the themes are rich and varied and Cuckoo’s Nest, while written in early 1960s, still holds up as a relevant piece of theatre. What drew me to “Cuckoo’s Nest” was the complexity of themes and how we could represent them from the characterization, costumes, props used, lighting, sound, projection and the set design and decoration. I truly hope that you feel that all of these elements help to immerse you into this world – and please come up and tell me what you thought after! I love hearing what you thought different elements meant and learning from you so I can become a better director.