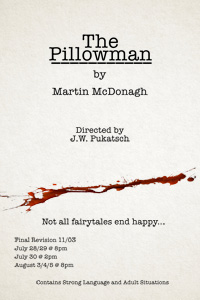 In an unnamed country living under a police state, short story writer Katurian finds himself locked in an interrogation room, defending himself against accusations that the stories he has crafted bizarrely resemble recent child murders in the town. As he struggles to convince the police that he has nothing to do with these deaths, he expounds on the dark narratives he has crafted and the horrific circumstances that have influenced his mind to create such twisted tales. While very dark and disturbing, the play displays McDonagh’s macabre wit and humor, while presenting a deeply disturbing tale of the artistic temperament and how art can be a dangerous thing.

This show contains gruesome scenes of violence and strong adult language and content.

For adults who like horror that’s smart, stories that are twisted and a thought-provoking underlying message, it’s not a show you’ll want to miss.—Holly Quinn, DelawareOnline

This is a play you should experience.—Mike Logothetis, Delaware Art Info